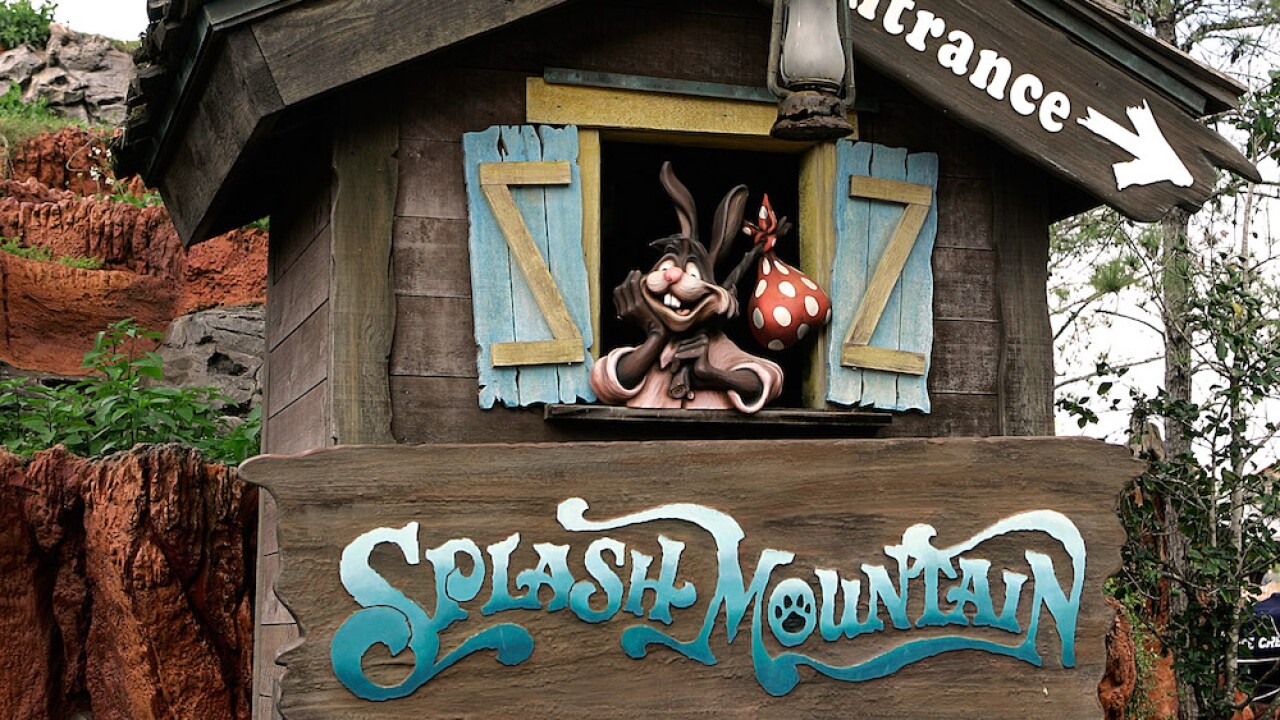 John Raoux/AP
** ADVANCE FOR WEEKEND OF MARCH 24-25 ** The character Brer Rabbit, from the movie, "Song of the South," is depicted near the entrance to the Splash Mountain ride in the Magic Kingdom at Walt Disney World in Lake Buena Vista, Fla., Wednesday, March 21, 2007. Walt Disney Co.'s 1940s film "Song of the South" produced one of the brand's most famous songs _ the Oscar-winning "Zip-a-Dee-Doo-Dah" _ and inspired two theme park rides. Each lives on, but the movie remains hidden in the Disney archives, never released on video in the United States and criticized as racist for its depictions of Southern plantation blacks. (AP Photo/John Raoux)

Disney Parks announced Thursday that one of its most beloved rides will be getting a makeover.

According to a press release, "Splash Mountain" at both Disney World and Disneyland will be re-themed after Disney's 2009 film "Princess and the Frog" — the first Disney movie to feature a Black princess character.

"Splash Mountain" opened at Disneyland in 1989 and at Disney World in 1992. Since its oepening, the ride has been themed after the 1946 film "Song of the South" — a movie set in the Antebellum South that, since its release, has been criticized for its handling of race.

The voice of Princess Tiana and Tony Award-winning actress, Anika Noni Rose, shared, “It is really exciting to know that Princess Tiana’s presence in both Disneyland and Magic Kingdom will finally be fully realized! As passionate as I am about what we created, I know the fans are going to be over the moon. The Imagineers are giving us ‘The Princess and the Frog’ Mardi Gras celebration we’ve been waiting for, and I’m here for it!”

The approach to retheming or “plussing” attractions (as Walt Disney referred to it) begins with Imagineers asking the question, how can we build upon or elevate the experience and tell a fresh, relevant story? It’s a continuous process that Imagineers are deeply passionate about. And with this longstanding history of updating attractions and adding new magic, the retheming of Splash Mountain is of particular importance today. The new concept is inclusive – one that all of our guests can connect with and be inspired by, and it speaks to the diversity of the millions of people who visit our parks each year.

Charita Carter, the senior creative producer leading the project at Walt Disney Imagineering shared, “Like Princess Tiana, I believe that courage and love are the key ingredients for wonderful adventures. I am delighted to be a part of bringing this fun-filled experience to our guests.”

For Imagineers, change is rooted in a tradition set by Walt Disney who encouraged new innovations, new ideas, new scenes and current storytelling. And the experiences they create can be enjoyed by guests who visit our parks from all over the world.

As part of the creative development process, conceptual design work is well underway and Imagineers will soon be able to conduct preliminary reviews and develop a timeline for when the transformation can start to take shape.