Copyright 2017 Scripps Media, Inc. All rights reserved. This material may not be published, broadcast, rewritten, or redistributed.
Lupiani, Joyce

LAS VEGAS (KTNV) — Jack Adams, or "Fast Jack" as he was known, loved to race hot rods, but he loved his family even more.

"He just loved to be around people," said Dionne Adams, his daughter.

Adams says their world turned upside in June after her father's sudden and aggressive cancer diagnosis.

"They did a CAT scan and said they had found a pretty significant mass in his lower left lung," explained Adams.

A signed power of attorney showed Jack's initials next to a line explaining he did not want his organs or tissues donated. 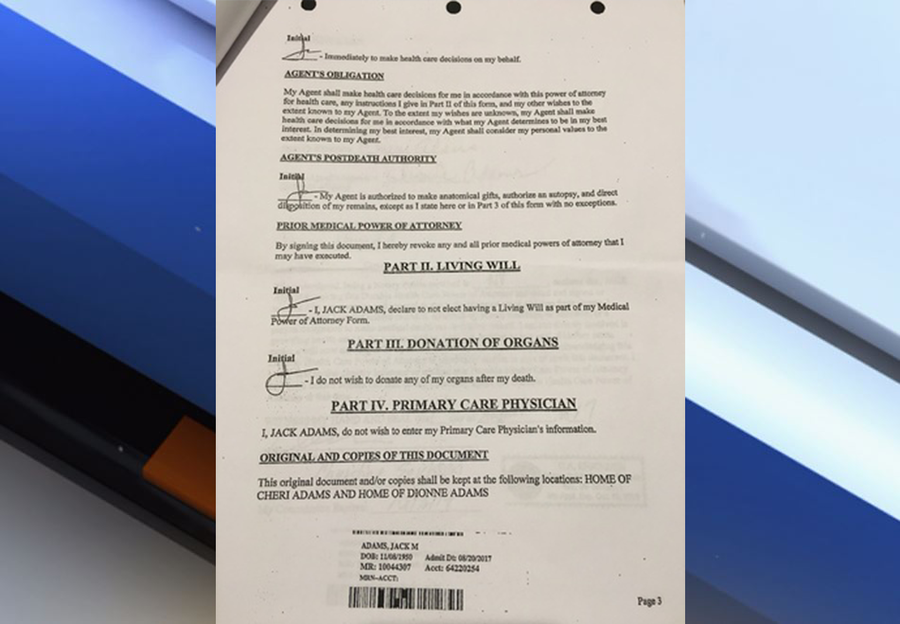 "He said, 'You know what, I don't want to be. I am tired of being poked and prodded,' he hated that," said Adams.

By October, Jack took his final breaths. He died surrounded by his family on October 7. Shortly after, Jack's wife received a series of phone calls.

"[My Mom] said the donor program had called. At one point, they wanted tissue on one call and organs in another call," Adams described.

Adams says her mother told the Donate Life Nevada Network they did not wish to participate.

Dionne says they learned her father's tissues and corneas had been harvested while they were at a funeral home making final preparations.

"I was very upset, I was in shock, first of all," said Adams. "I was angry, I was sick to my stomach and I said 'my mom told you no,'" added Adams.

Contact 13 asked the Donate Life Nevada Network how this could happen.

A spokesperson could not speak about specifics, citing patient privacy laws.

Rather, Contact 13 submitted email questions and was given a statement:

We extend our most sincere condolences to the family in their time of healing after the loss of a loved one. Our goal at Nevada Donor Network is to provide the utmost care and compassion to each family we interact with, and address any and all concerns with this same diligence. Each year, we support thousands of donor heroes and courageous families through the donation process. We make every good faith effort to honor a person's final wishes, including checking both state and national donor registries to determine registration status in the absence of a known objection or revocation.  Our team maintains strict compliance with all state and federal laws.

If someone is a participant in the donor program, but at some point, wishes to no longer participate, what is the process to get out of the program?

Per NRS 451.559, a person may amend or revoke their donor designation at any time.

What steps or processes are in place to make sure final wishes are met?

Our team checks both state and national donor registries. If the person is a registered donor, our team will make the family aware of their loved one’s decision to donate, answer questions about the process, and provide any support they may need. If the person is not a registered donor, the family will be offered the opportunity of donation as required by state and federal law. After providing authorization, the family is asked to complete a medical and social history.

Adams says the Donate Life Nevada Network never asked about a power of attorney or other documentation regarding her father's final wishes.

Adams says her father's corneas were given to patients who needed them.