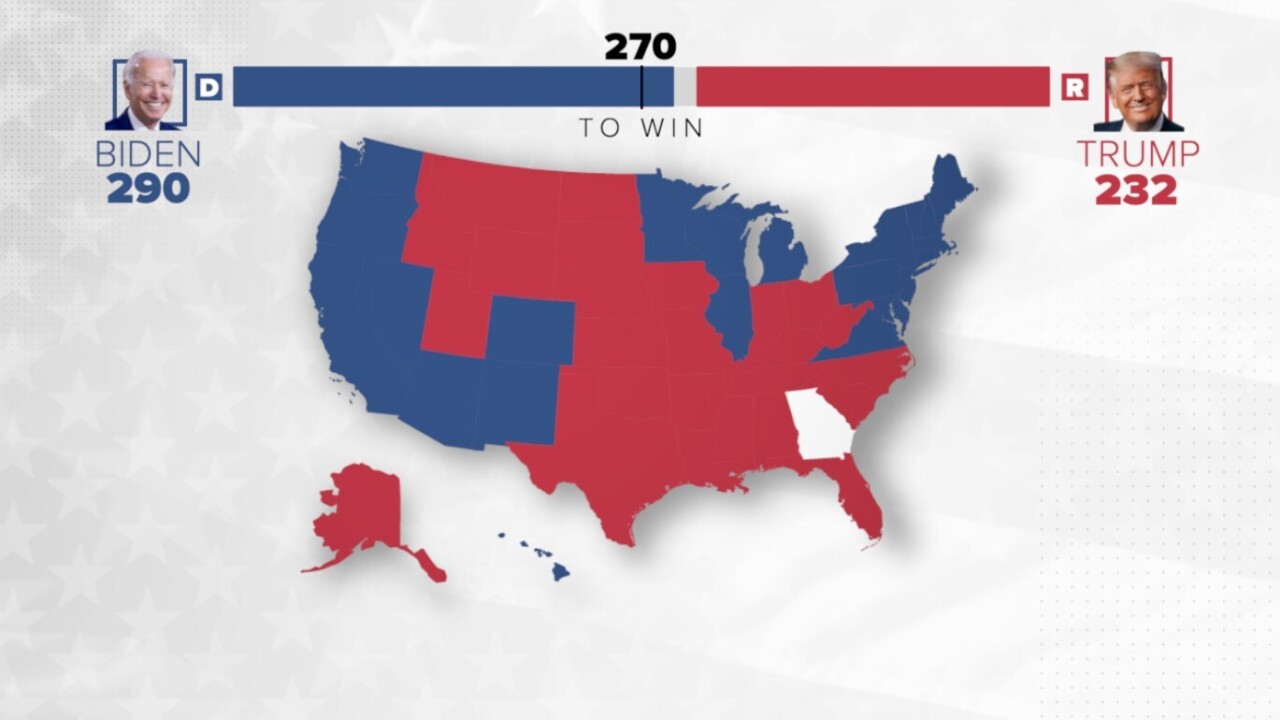 Latest update Friday, November 13: The Associated Press projects President Donald Trump will win North Carolina and take their 15 electoral college votes. Trump leads in North Carolina by 73,697 votes. Friday was the deadline for counties to certify their election results. Trump now has 232 electoral college votes and Joe Biden is still at 290. The AP has already projected Biden will win the presidential election.

Meanwhile, Georgia remains uncalled at this time. The Associated Press has not projected a winner in that state and the margin between the two candidates remains at 0.3 percent in Biden's favor. A hand recount audit is underway currently.

UPDATE 12:30 p.m. ET Tuesday, November 11: The Associated Press projects President Donald Trump will win Alaska, and take their 3 electoral college votes. This brings Trump up to 217 electoral votes and Joe Biden is still at 290. The AP projected Biden will win the presidential election.

A recount in the presidential race will happen in Georgia, and North Carolina has still not been called for either candidate at this time.

UPDATE Saturday 7 p.m. ET: The presidential race has still not been called in Georgia and North Carolina at this time. Trump leads in North Carolina by around 75,000 votes and Biden has a small lead in Georgia. Democrats will maintain majority in the House of Representatives. In the Senate, Democrats have 48 seats and Republicans have 48 seats, there are two senate races in Georgia headed to a run-off election in January.

UPDATE Saturday 11:30 a.m. ET: The Associated Press is projecting Joe Biden will be elected President of the United States, after being projected to win Pennsylvania and Nevada Saturday morning.

America, I’m honored that you have chosen me to lead our great country.

The work ahead of us will be hard, but I promise you this: I will be a President for all Americans — whether you voted for me or not.

I will keep the faith that you have placed in me. pic.twitter.com/moA9qhmjn8

This will make Biden the oldest person to take the oath of office for President of the United States.

Kamala Harris is projected to be the Vice President, making her the first woman, first Black American and first South Asian American to hold that office.

See below for more.

As of Tuesday afternoon, Joe Biden had 290 Electoral College votes and Donald Trump had 217, based on Associated Press projections. This puts Biden over the 270 threshold.

Below is a timeline of the presidential race since Election Day. Refresh below for updates:

UPDATE 11:30 a.m. ET: The Associated Press is projecting Joe Biden will be elected President of the United States, after being projected to win Pennsylvania Saturday morning. Updated vote tallies Saturday increased Biden's lead in Pennsylvania to more than 30,000 votes, and in Nevada he leads by 25,000 votes.

UPDATE 11 a.m. ET: Democrat Joe Biden still leads in Arizona, now by more than 20,000 votes. The Associated Press called Arizona for Biden earlier this week as votes were still being counted. President Donald Trump did close the gap in Arizona, Friday night Biden was ahead by more than 29,000 votes. Saturday morning the Secretary of State for Maricopa County, where Phoenix is located, said there are still less than 40,000 votes to still process. However, those remaining ballots need additional time to process, including overseas ballots, braille ballots and damaged ballots.

UPDATE SATURDAY 10:30 a.m. ET: Democrat Joe Biden increased his lead in Pennsylvania and Georgia overnight. Saturday morning, Biden leads by 28,877 votes in Pennsylvania. About 99 percent of the votes are reportedly counted at this time. In Georgia, the difference has increased from 4,000 votes Friday night to more than 7,000 votes in Biden's favor Saturday morning. Georgia is also reporting about 99 percent of total votes counted.

UPDATE 9: 45 p.m. ET: Biden gained nearly 5,500 additional votes in Allegheny County thanks to a combination of mail-in, provisional and overseas ballots to take a lead of more than 27,000. Biden's lead is nearing the point that would be outside the margin for an automatic recount.

UPDATE 9 p.m. Another tranche of votes was released in Maricopa County, Arizona representing nearly one-third of the remaining ballots left in the state of Arizona. Trump gained a net of 7,000 votes to cut Biden's lead to 30,000 votes. The Associated Press previously called Arizona.

UPDATE 7:40 p.m. ET:Secretary of State Kathy Boockvar said on Friday that the overwhelming majority of mail-in and absentee ballots in Pennsylvania have been counted and the process of counting provisional ballots has begun.

UPDATE 7:30 p.m. ET: A new batch of more than ballots were released by the Allegheny County in Pennsylvania, adding to Biden's lead by over 3,000 votes in the state. Biden now leads the state by more than 20,000. Pennsylvania is important because if he wins the state, he wins the presidency.

UPDATE 5:30 p.m. ET: The lead for Biden has jumped in Georgia following a tranche of votes came from Gwinnett County. Biden's lead increased to nearly 4,200 as the mail-in vote tabulation is nearing the end.

Meanwhile, Trump has neared 70 million votes in the popular vote, which would give him the second-most votes in an election. Both Biden's and Trump's vote total this year is more than any other candidate in past elections, indicating this year's election had a strong turnout.

UPDATE 1 p.m. ET: Election officials from battleground states announced updated vote tallies will come Friday night, as counting continues through the weekend. Arizona is expected to update their vote tally 7pm local time, Pennsylvania and Nevada have said they will update their vote tallies in the late afternoon. Most states expect to have nearly all votes counted at the end of the weekend, however some states allow mail-in ballots to be accepted and counted several days after Election Day.

UPDATE: 9 a.m. ET: Democrat Joe Biden is now leading President Donald Trump in the battleground state of Pennsylvania. By Friday morning, Biden overtook Trump in the number of ballots counted in the state, which Trump must win to have a shot at reelection. Biden now holds a nearly 6,000-vote advantage. The contest is still too early for The Associated Press to call. Votes in the state are still being counted.

UPDATE: 5 a.m. ET: Democratic presidential nominee Joe Biden has pulled ahead in Georgia. The former Vice President now holds a slim 917-vote edge throughout the state with more mail-in ballots still to be counted. President Donald Trump held a substantial lead on election night, but Biden has vastly outpaced Trump on mail-in ballots. The state remains too close to call.

UPDATE: FRIDAY, 2:40 a.m. ET: Pennsylvania and Georgia continues to slowly release figures that have steadily allowed Biden to eat away at Trump's lead. In the last hour, figures from Philadelphia and Clayton County, Georgia, have been released. Both areas are highly favorable to Biden.

UPDATE: THURSDAY, 10:55 p.m. ET: A huge vote drop came out of Philadelphia Thursday evening, which cut Trump's lead to nearly 26,000 votes. There are roughly 200,000 votes left to count in Pennsylvania. Biden is poised to take the lead in the state in the coming hours.

UPDATE: 4:40 p.m. ET: Nevada is not expecting to release more number until Friday morning. Pennsylvania and Georgia are expecting to slowly release numbers through the night. Arizona, which some networks have not declared a winner, will release a large number of ballots at 9 p.m. ET.

UPDATE: 3 p.m. ET: Though Georgia remains took close to call, officials say there are still about 47,000 ballots remaining to be counted. Officials hope to finish the count on Thursday, though as many as 8,000 mail-in ballots could be eligible to be counted if they are postmarked by Nov. 3.

UPDATE WEDNESDAY: 6 p.m. ET: Biden declared the winner of Michigan, meaning Biden is just one state away from being elected. He leads in Nevada, but trails in Pennsylvania, North Carolina and Georgia. Trump has to win all four states in order to secure re-election.

UPDATE: 1:00 p.m. ET: President Donald Trump's campaign manager wrote in a statement that they plan to "immediately" request a recount in Wisconsin, where the presidential race is close. Biden leads by less than 1 percentage point, according to the latest Associated Press results.

UPDATE: 9:00 a.m. ET: As votes continue to trickle in from Michigan, totals now indicate that Biden holds a slim lead in the state — though there are still thousands of votes yet to be counted. Michigan is a key state that is vital to both Biden and Trump's path to 270 electoral college votes.

UPDATE: 5:00 a.m. ET: The state of Wisconsin released more information, and while the race is still too close to call, the state now reports that Biden now has a slight lead. The state will go a long way to determining which candidate wins the presidency.

UPDATE: 2:55 a.m. ET: Biden has won arguably his most important state of the night by taking the state of Arizona. 2020 marks the first time a Democrat has won Arizona in this century. The victory also means that Biden can lose either Nevada, Wisconsin, Pennsylvania or Michigan and still win the election.

UPDATE: 2:45 a.m. ET: Trump declared victory despite trailing by a 225-212 margin in the Electoral College. He falsely claimed that the election is being stolen as the counting in states is taking longer to be counted. He, too, addressed supporters in an early Wednesday morning speech.

UPDATE: 1:14 a.m. ET: Trump has won Texas, holding off a Biden challenge in the state. Trump has narrowly caught up to Biden's lead in the Electoral College.

UPDATE: 12:35 a.m. ET: Trump won the state of Florida in arguably the biggest and most important call of the night.

UPDATE: 12:25 a.m. ET: In recent minutes, the Associated Press has called Hawaii and Minnesota for Biden; Trump has won Ohio, Montana and Iowa. Biden speaks to supporters, urging voters to "keep the faith."

UPDATE: 11 p.m. ET: The first battleground state of the evening has been called with Biden taking the state of New Hampshire. It was a state Democrats won four years ago. Most other key battlegrounds remain in Trump's favor, but have not been called yet. An exception is Arizona, which would be a huge boost to Biden. If Biden hangs onto Arizona, Biden could likely afford to lose Pennsylvania, Wisconsin or Michigan and still win.

UPDATE: 10:30 p.m. ET: Trump has picked up Missouri's 10 Electoral College votes. Trump is now pulling ahead in most battleground states as Trump has retaken the lead in North Carolina. Biden is leading in Arizona, which would be a turnover if he is able to hang on there.

UPDATE: 9:30 p.m. ET: The District of Columbia was called for Biden, which is one of the strongest Democratic strongholds in the US.

UPDATE: 9 p.m. ET: A number of states closed at the hour. Trump is the projected winner in North Dakota, South Dakota, Wyoming, Louisiana and Nebraska. Biden is projected to win New York and New Mexico. Biden holds narrow leads in Pennsylvania, North Carolina, Ohio and Texas, while Trump has narrow leads in Florida, Georgia and Michigan.

UPDATE: 7 p.m. ET: Polls are closed in six states (Vermont, Virginia, South Carolina, Georgia, Kentucky and Indiana). As soon as polls closed, Vermont was called for Joe Biden and Donald Trump was declared the winner of Kentucky. The other states are either too close or too early to call.