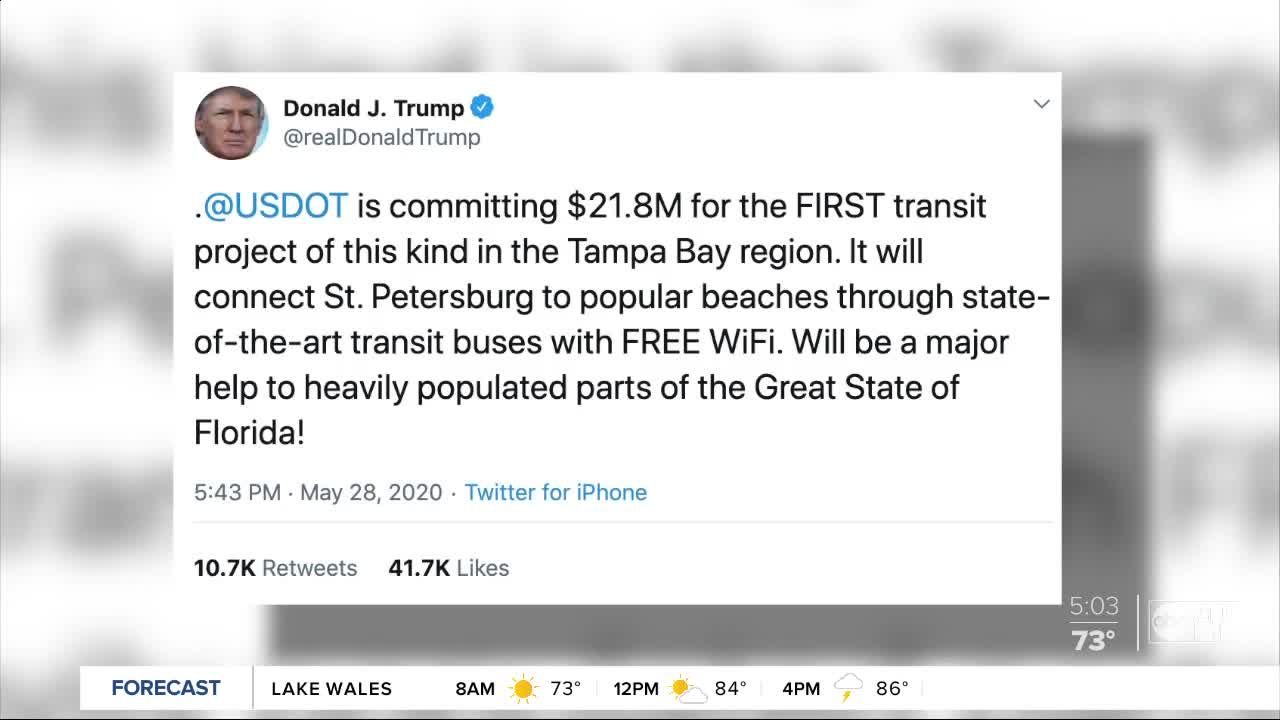 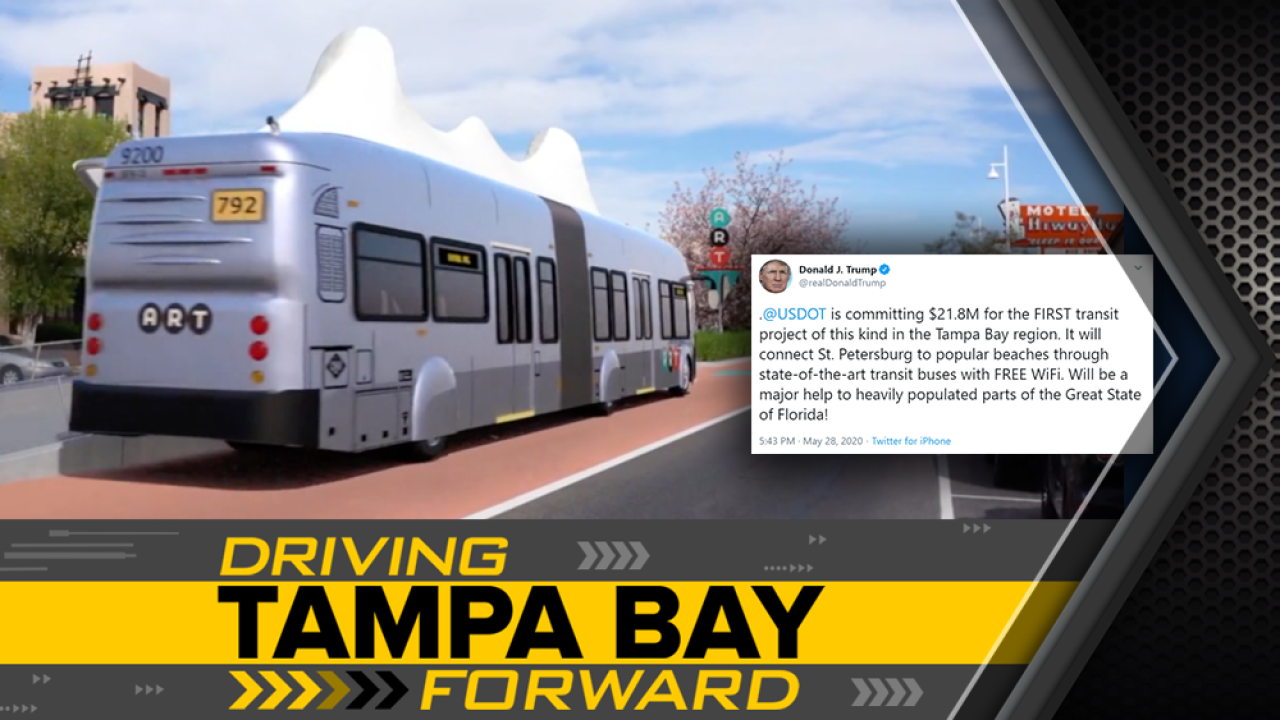 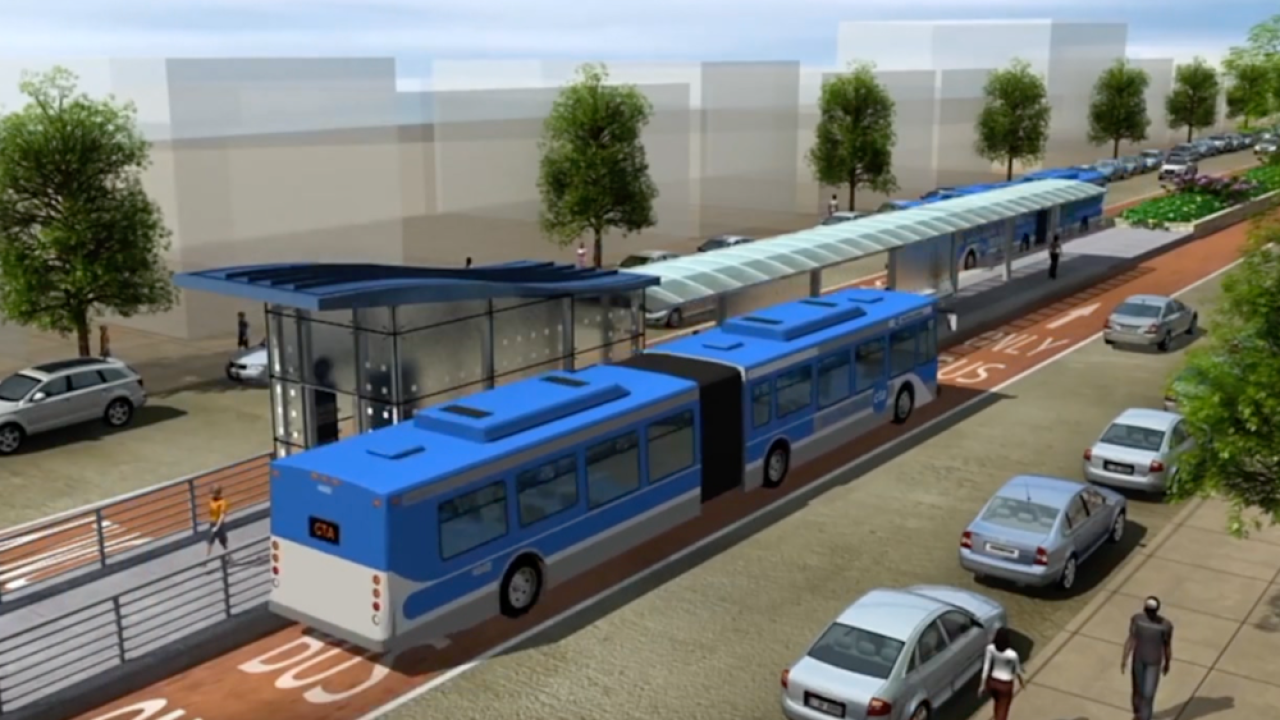 "It will connect St. Petersburg to popular beaches through state-of-the-art transit buses with [free Wi-Fi]," President Trump explained on Twitter. "Will be a major help to heavily populated parts of the Great State of Florida!"

.@USDOT is committing $21.8M for the FIRST transit project of this kind in the Tampa Bay region. It will connect St. Petersburg to popular beaches through state-of-the-art transit buses with FREE WiFi. Will be a major help to heavily populated parts of the Great State of Florida!

According to the PSTA, the Bus Rapid Transit (BRT) is "a specialized, train-like transit service with frequently arriving buses - often running in their own specially dedicated lane." It only serves a limited number of stops along the route, the buses have a technology that allows vehicles to communicate with the traffic signals along the route and doesn't have steps or stairs so passengers with bikes or wheelchairs can easily hop in and out of the bus -- all to ensure faster speed.

BRT also features specifically-branded buses and stations that give riders the look, feel and experience of rail transit, according to PSTA.

You can click here for more information on this project.

Here's what we know about BRT*:

"This funding has been long-awaited and is much needed. The Central Avenue Bus Rapid Transit project is the first transit project of its kind in the region and our hope is that it not only makes going back and forth between our vibrant downtown and the beaches easier, but helps to move the larger conversation around regional transportation forward."

"Forward Pinellas is thrilled with the announcement from President Trump that the federal government is funding its share of the Central Avenue Rapid Transit project. This is a regional transportation priority because it is the first leg of a regional network of premium transit services that helps to connect and unify the Tampa Bay region. By connecting downtown St. Pete with the Gulf Coast beaches, the project supports workers, residents, visitors and businesses with an affordable and efficient transportation option. It shows what happens when we work with our partners in the county and across the region to define clear priorities for Tampa Bay."

“This would be consistent with what officials at FTA have been telling us for months, that federal money will be made available for the Central Ave BRT project and they too see the benefits in establishing this service.”

However, not everyone is excited about it the project.

"I understand where Mayor Kriseman is coming from in St. Petersburg. I can see where it benefits them. But it doesn’t really benefit us at all," said Al Johnson, St. Pete Beach mayor.

Johnson says the roads in St. Pete Beach are already full without making room for a bus lane.

"It's a small island. A 60 foot articulated bus is not going to fit," said Johnson.

Johnson says more improvements need to be made before he’s on board.

"We don’t want to be collateral damage for bus rapid transit in St. Petersburg," said Johnson.

You can click here for more information on this project.