Behind the Scenes of "Taking Action Against Domestic Violence"

Copyright 2018 Scripps Media, Inc. All rights reserved. This material may not be published, broadcast, rewritten, or redistributed.
<p>Taking Action Against Domestic Violence</p> 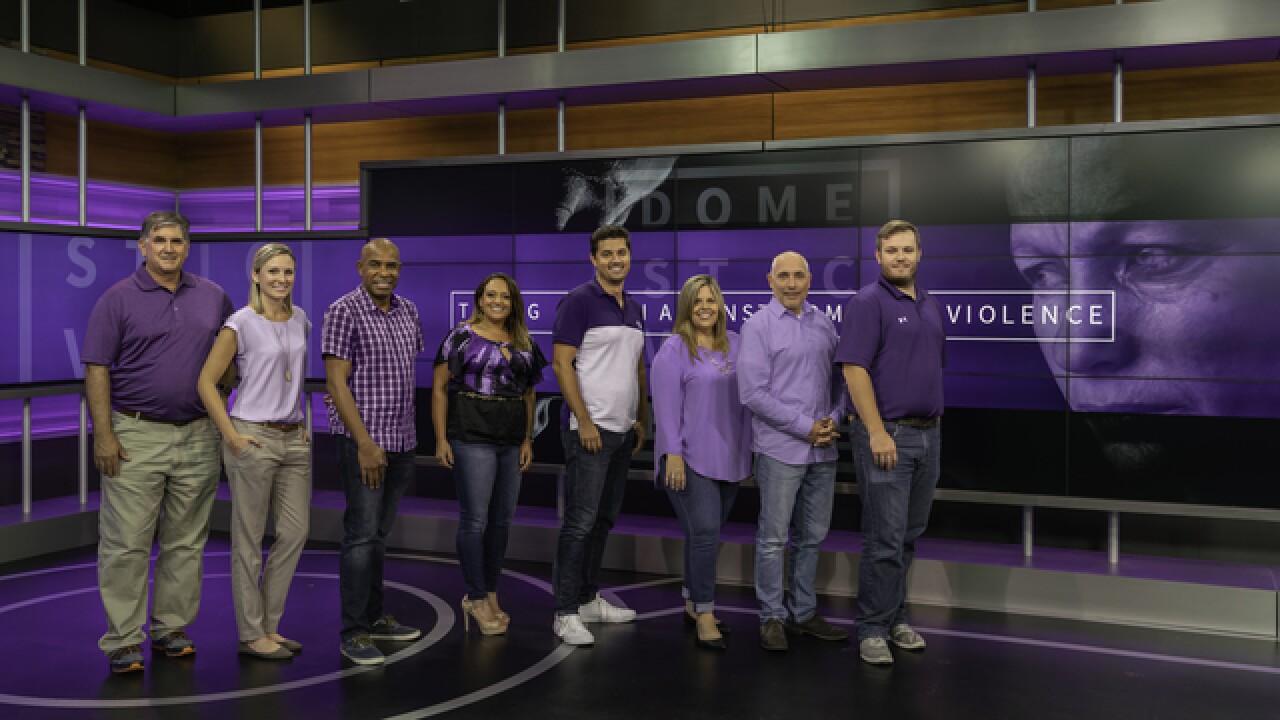 This week at ABC Action News, employees are reaching an important milestone - a decade of domestic violence awareness! Every year, 6 weeks of intense content is packed into news stories, public service announcements, 1-Hour Special, a customized DV webpage and more.  It’s shared across all media platforms, plus 7 streaming APPS.  Everyone has a role to play, from the news anchors you see in front of the camera to the designers you don’t see in the 3rd floor building of WFTS TV in Tampa, FL.

Inside the Scripps Graphics Hub on floor 3 are the “multimedia designers” who work their magic every year for the “Taking Action Against Domestic Violence” campaign. They create graphics, animations, branding and more using computers. In 2009, Dan Psarras, the hub’s Senior Graphics Designer, created the first logo with a mother & child silhouette. In 2018, Art Director Darrin Shaw and designer Brandon Shirley rebranded the campaign with an eye chart. And every year in between, members of this team have created key pieces of this 5-time Emmy award winning campaign!

“What we started with was the traditional path of designing logos”, explains Shaw. “What we confirmed, half way through the process, is that after you develop these logos you have to nurture them. They almost take on a life of their own.”

“We’re all content creators”, explains Radu Somesfalean, who oversees the hub as Managing Director of Graphics and Design. “If you can dream it, we can do it!” Tasked with re-branding the 2018 TAADV campaign commensurate with its 10-year milestone, designers transformed a doctor’s eye-chart into a modern-day DV awareness symbol. Hiding the letters in plain sight they spelled “domestic violence’’. Incredibly fitting for an issue affecting 1 in 4 women and 1 in 7 men in the U.S. across all socio-economic levels. (Source: FCADV)

Over the years, this same team has produced countless “deliverables” displaying the Florida Domestic Violence Hotline. How satisfying can that work be for a designer? Very, when you consider the 34,250 hotline calls made, specifically, during the 6 weeks of the 2009 – 2017 TAADV campaigns! That’s more than 34-thousand people reaching out for help!

Since 2015, these designers have also been tweaking the most recognized DV awareness tool in the country - Power & Control Wheel and Equality Wheel. In use since the 1980’s, the wheels remain the most widely used tools in the arsenal of advocates. They serve as mirror images of one another. One illustrates the warning signs of a DV relationship. The other shows the basics of a healthy one. The images where first added to the DV webpage as PDFs. Users could easily print copies to share with family and friends. Scripps’ designers would later retool the wheels to make them interactive. The engagement increased exponentially – with a staggering 2,000% increase in web traffic to the Equality Wheel in 3 years! Matt Borek, Director of Digital at WFTS, tracked 1,777 pageviews for the wheels during the 2017 campaign alone! “It’s incredible”, says Borek. “Web traffic to the Power & Control Wheel has increased too - 1,500% in the 3 years.”

“This year’s campaign is the child of hundreds of iterations. We started from zero several times, knowing this labor of love will pay off in the end with a visual that honors the victims and empowers people to act”, says Shirley. Now in his 3rd year on the project, Shirley admits “Taking Action Against Domestic Violence is the campaign I look forward to each year. We’ve taken the many lessons learned from years past to make something we believe will be impactful for years to come.”

For Nick Nicholson, Vice President and Station Manager at WFTS, it’s a station-wide initiative that made a profound impression from day one on the job in Tampa. “I remember walking into WFTS on my first day to a sea of purple banners and everyone wearing purple.  It was kickoff day for the 2014 TAADV campaign; and I didn’t get the memo, so to speak.  As I walked the station introducing myself that day, the passion for this campaign within the building was evident.  In today’s world, few missions have a lifespan of 10 years.  Our ‘Taking Action Against Domestic Violence’ initiative continues to shed light on a societal issue that many people want to pretend doesn’t exist. In reality, it impacts more people in our community than we know.  We have had many survivors reach out to us and thank us for giving them the courage and or resources to leave their situation.  For every one of those survivors who have reached out to us, I know there are countless others this campaign has helped.   It is because of this that we are 10 years into this campaign.”

Last year in Florida, there were 106,979 reported cases of domestic violence. Hillsborough County ranks third in the state. Only Miami-Dade County and the greater Orlando area had more reported cases of DV in 2017. (Source: FDLE Uniformed Crime Report 2017)