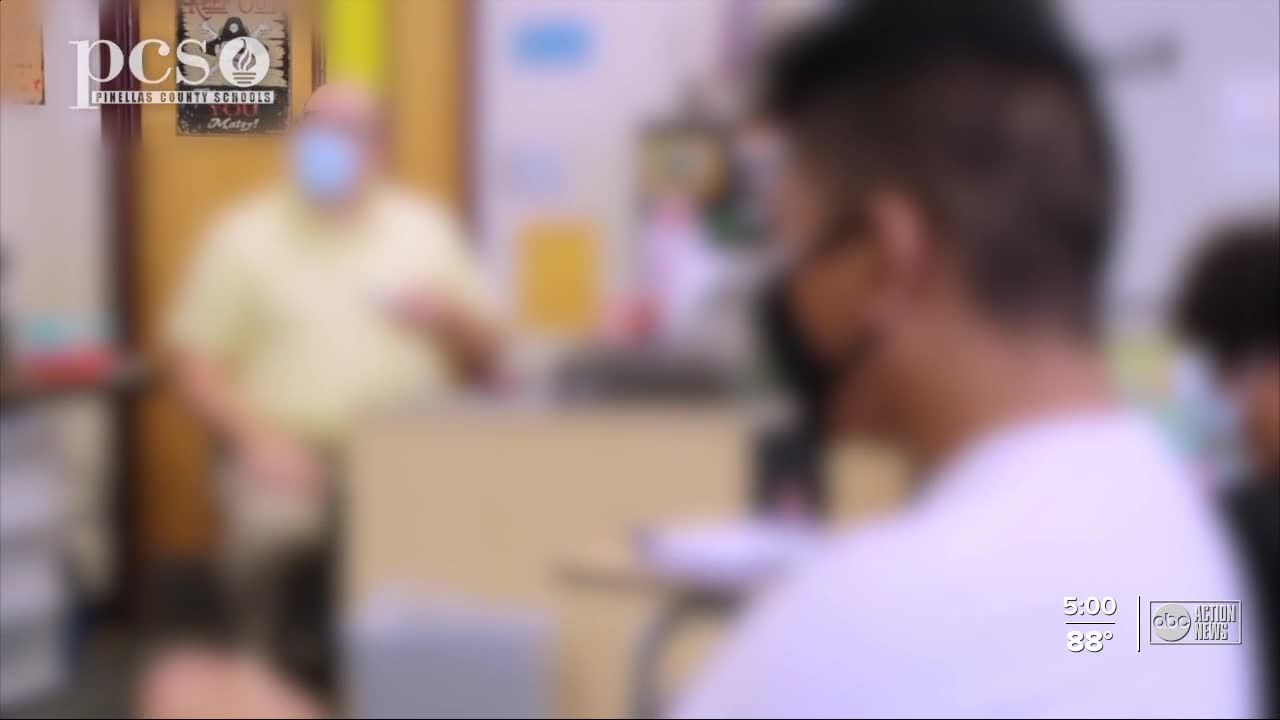 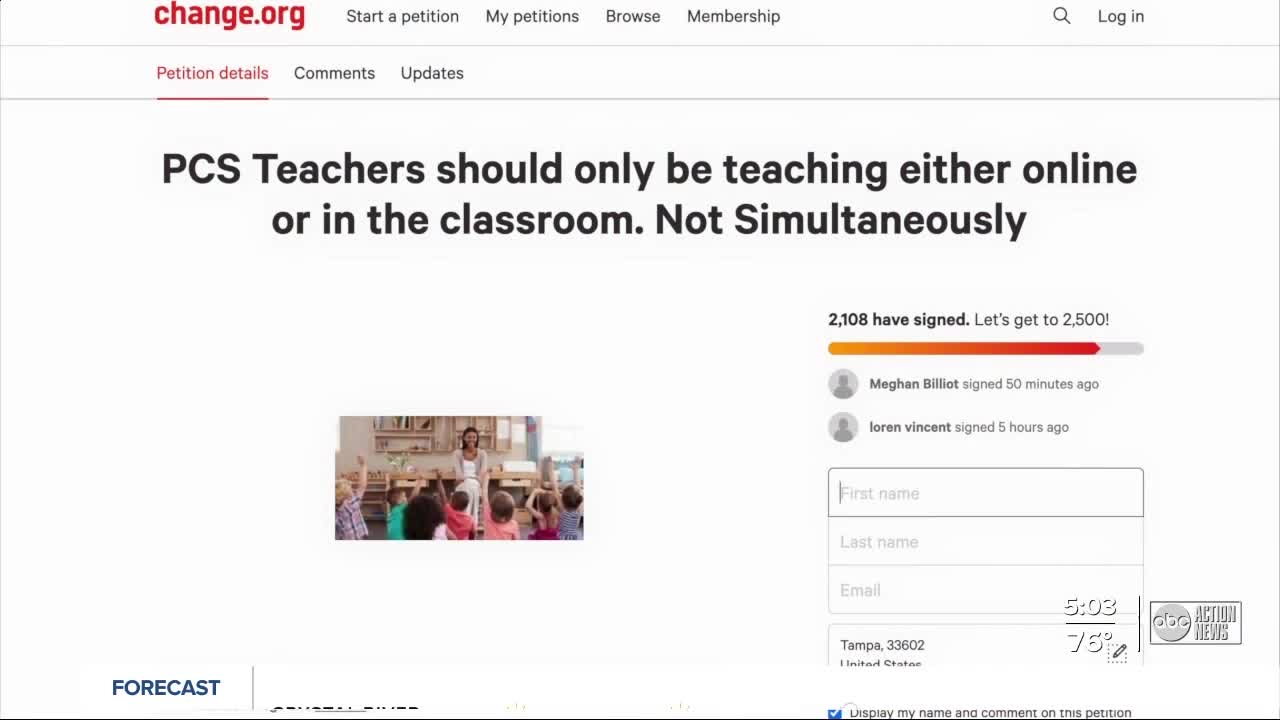 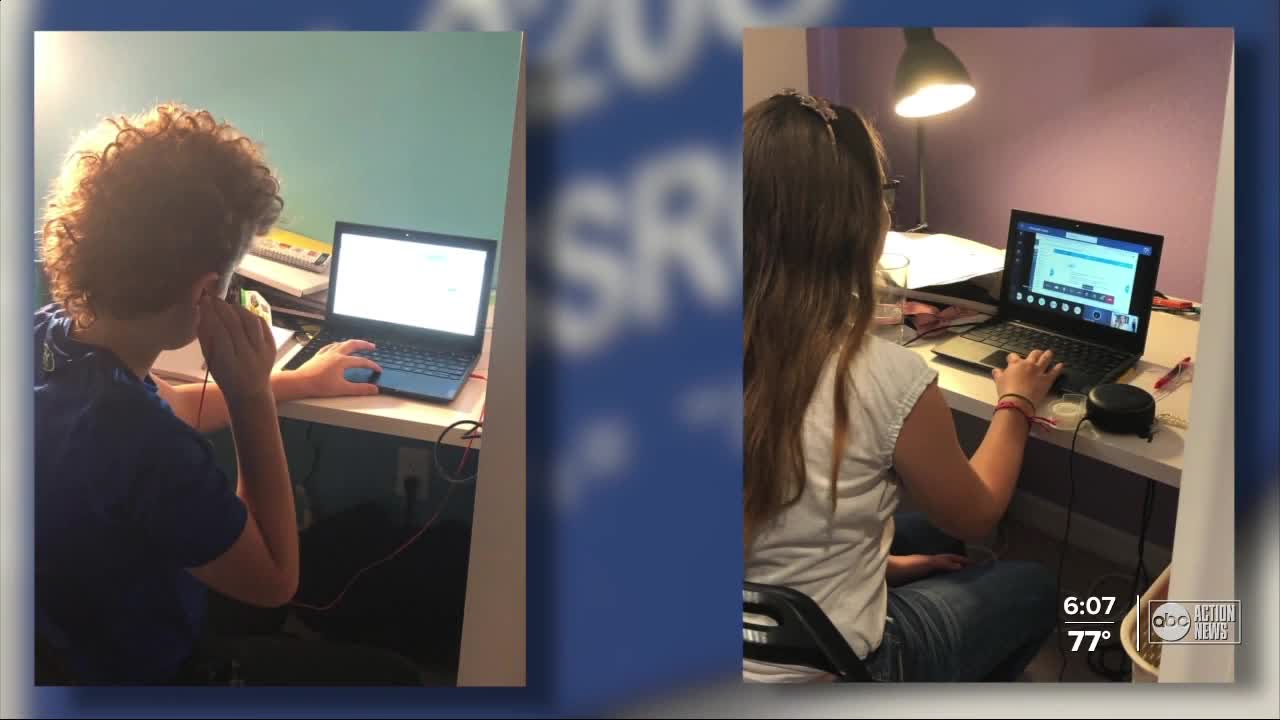 PINELLAS COUNTY, Fla. -- Pinellas County parents and teachers are feeling frustrated and defeated, saying their kids are being shortchanged because teachers are working with students in the classroom -- and those learning from home -- at the same time.

“The first week of school, I actually had three breakdowns, and I’m not normally like that,” said Marie Hamm, a Pinellas County teacher.

Hamm is among the many Pinellas County teachers trying to teach students face-to-face, and on her computer screen, simultaneously.

“When people feel like they can’t meet the needs of their students, it makes it really hard to go through the day,” said Hamm.

She’s joining hundreds of others in asking the school district to end simultaneous teaching.

“I’ve worked other jobs… and at no point have I felt so incapable of getting done what it is that I’m expected to get done,” said Patrick Mugan, a Pinellas County teacher.

Mugan spent his Labor Day weekend grading papers, but says he was still behind when he returned to the classroom Tuesday.

“I teach U.S. History and World History in 6th grade. Every 6th grader takes that. Why is there not one teacher at my school that’s doing all online, one teacher that's doing face-to-face,” asked Mugan.

Parents and students are frustrated, too.

“They feel like they’re not learning as much as they normally would,” said Amanda Loeffler, a parent of three children in Pinellas County schools, two of which are in simultaneously taught classes.

“They’re [teachers] now expected to be two teachers, probably the aid, and then the janitor, and then the health department, you know, telling people ‘you need to keep your mask on,’” said Loeffler.

School board members are expected to take up their concerns during the Pinellas County School Board meeting on Tuesday at 5 p.m.

Educators tell ABC Action News they're exasperated and that it's crucial changes are made.

Paula Stephens teaches 1st grade and says she is working daily with 8 students online and 8 in the classroom. On Tuesday, she says the students had two separate math problems. One was presented in the textbook and the other in the online software.

"I had to split my attention between the two groups and it's not fair to the students," she said. "I’ve been teaching 23 years and this is day 11 and I’ve gone home in tears two days already. It's the stress of trying to manage two platforms at the same time," Stephens explained.

Ginger Brengle says she sees the problems firsthand every day working in library media technology services for high schools across the district.

"This is the first year that I’ve had someone from the faculty in my office every day crying. And these are people I’ve never seen have issues before,” she said.

Bengle says there have been issues with technology— and kids stuck in online waiting rooms unable to get into the programs they need.
She worries simultaneous teaching was rolled out in a haste.

“Every teacher should have two monitors, microphones, separate webcams,” she added.

Pinellas county school leaders say simultaneous teaching is the best way to keep class sizes small to slow the spread of covid-19, but parents and teachers hope they’ll be able to find a way to combine classes and keep educators working with one group or the other.

“I think it’s time for them to revisit and admit this didn’t work so they have to go back and figure out something else," 2nd-grade teacher Tracey McConnell added.