Can't find glasses? Here are other ways to view eclipse 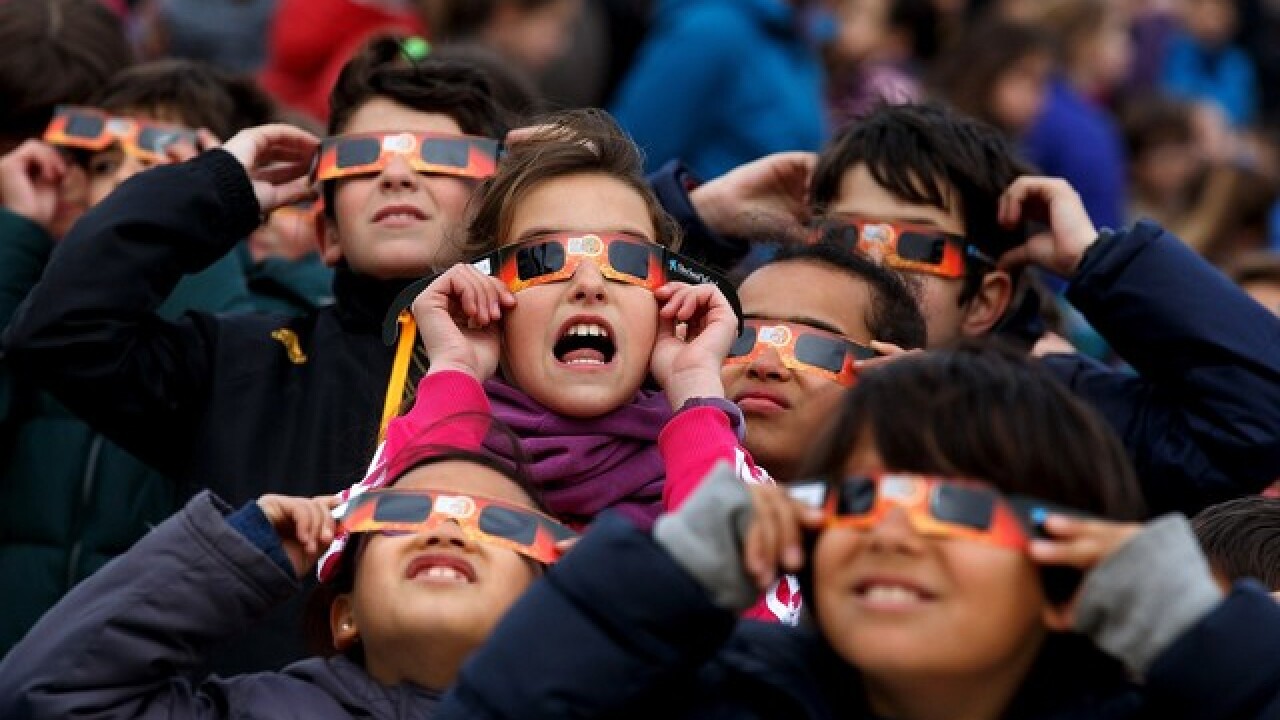 Observatories, libraries and museums are buzzing this week, with would-be astronomers like Anne and Joel Bayou stopping by to find eclipse glasses before they all run out. "My mom wanted two, and my sister wanted two, and I have a friend who couldn't find them anywhere," Anne Bayou said. And that's the bad news: stores everywhere are running out of the official NASA-approved glasses. With the eclipse just around the corner on Monday, Aug. 21, many people are feeling stressed.

Nationally known astronomer Dean Regas, host of the PBS show "Star Gazers," understands the frustration of many people right now who are finding store shelves sold out. So he suggests alternative ways of watching, such as an old fashioned pinhole projector, the way millions of schoolchildren watched the last solar eclipse back in 1979. https://www.instagram.com/p/BX3kvhWlBRW/?tagged=pinholeprojector Regas says anyone can make a safe, pinhole projector with a cardboard box, or even just two pieces of cardboard. https://www.instagram.com/p/BX343AAFNxK/?tagged=pinholeprojector "What you do is put a pinhole in a piece of paper or a box, let the light come through the hole to the ground, and watch the image on the ground," Regas explained. "If done correctly, it should make a picture of the eclipse, and you can watch the sun get smaller and smaller in real time." https://www.instagram.com/p/BX3oCkRFxW1/?tagged=pinholeprojector There's even an official NASA video on how to make a projector out of a cardboard box. NASA also has a printable pattern for creating your own pinhole projector. However, Regas says you need to resist the urge to turn around and look at the sun while doing this. RELATED: Amazon issues refund for potentially phony eclipse glasses

Regas says he is hearing from many people who plan to record the eclipse on their smartphone, perhaps to post on Facebook.

But experts say pointing your phone at the sun for several minutes might not be the best idea. "If you have your camera phone pointed at the sun for long periods of time, it could damage the electronics inside of it," Regas said. NASA says it's OK to snap a few quick photos of the eclipse. Apple has said there is no issue taking photos of the sun with iPhones. https://www.instagram.com/p/BX32bgwhQCI/?tagged=eclipsecamerafilters But if you are shooting the sun for more than a few seconds, NASA suggests placing a darkening filter or eclipse glasses over your phone's camera to prevent any possible sun "burn in," that could leave a white dot on future photos. "Hold that filter in front of the camera and that will help out a lot,"  Regas said. https://www.instagram.com/p/BX3bXAkF42T/?tagged=pinholeprojector If you don't have any way of filtering the sun, tech blogs suggest you lower the amount of light your phone allows in. RELATED: 7 ways to make some extra cash during the solar eclipse On an iPhone, look for a picture of the sun next to the yellow focus square. With your finger, drag the sun down the screen, which will darken the picture and let less light in. https://www.instagram.com/p/BX1LjahB0vN/?tagged=pinholeprojector The concerns may be overblown. But when it comes to an $800 phone, Regas says better safe than sorry. And remember: You shouldn't look at the sun, even though your camera is pointed there, so you don't damage your eyes.