VP debate helps voters on the fence solidify their preferences 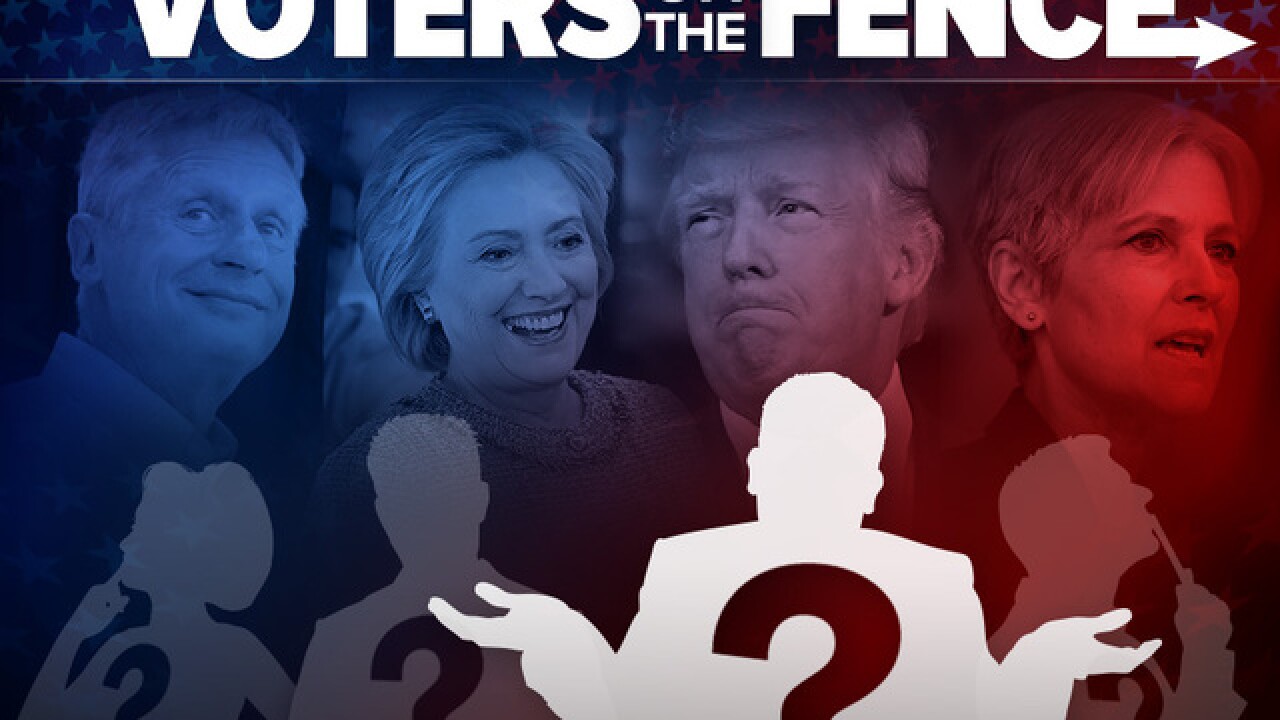 DecodeDC is following four undecided voters as part of “Voters on the Fence,” a series of stories about people who are struggling to make a decision about which  presidential candidate is right for them.

Tuesday night’s Vice Presidential debate at Longwood University in Farmville, VA may have been more fireworks than expected but for our voters on the fence it lacked substance.

“After fifteen minutes in, when they were just name calling each other and attacking Trump and attacking Hillary and not really answering questions, it was a waste of my time so I just turned it off,” said Alon Sendowski of Maryland who was watching the debate at home.

After his experience Tuesday Sendowski said he is close to hitting his limit—he’s seriously considering not voting at all.

Sendowski was one of two voters who opted to either skip or stop watching the debate early on.

Our two other undecided voters made it through to the very end and one was swayed by the performances. Emily Werff of Ohio decided to forgo staying up for the debate on Tuesday all together saying that her decision between Trump and Clinton was already made so she didn’t need to watch their VPs.

“I already know I’m not voting for Trump at this point, so watching this debate isn’t going to help me make up my mind because I’m already decided on that,” she said. A few weeks ago, Werff was considering Libertarian candidate Gary Johnson but was put off by a slew of comments he’s made that make him look uninformed on foreign policy.

“I’ve seen a couple things where he’s tripped up and so I’m not really sure if that’s like a, ‘I’m not good at public speaking’ kind of thing, but I think a president kind of needs to be,” she said, adding that she has now firmly decided to vote for Democrat Hillary Clinton.

“Yah I just feel myself leaning that way. She seems really put together. She knows what she’s doing politically. I know she’s got not that good of a past but I think that she does have enough connections and leadership quality to get it done.”

Margaret Deluca of Colorado did make it all the way through the vice presidential debate and said that Donald Trump’s running mate, Indiana Governor Mike Pence, was the clear winner.

“I think Pence hands down seemed more mature, more measured, more in control. He seemed more focused and probably did a better job of answering the questions that were posed,” she said.

“I thought Kaine would perform much better than he did. I guess he surprised me in that he seemed nervous and more like a high school debate kid rather than a professional because he only reverted to whatever little jabs he could get. Whether it was relevant or not, so he seemed off balance.”

Deluca thought Pence had stronger answers on Syria, labor and trade but he lost her when he began talking about religion and social issues. Pence may have been the clear winner of the night in her mind, but Deluca said that nevertheless she was not swayed to vote for Donald Trump because, “I honestly can’t vote for somebody who is so anti-woman.”

She is still leaning heavily towards voting for Clinton, “but with lots of reservations.” Deluca had been considering Gary Johnson, but now believes he “simply isn’t qualified.”

Deb Morrison of Indiana was the only undecided voter that was somewhat swayed by the vice presidential debate. Sitting on the fence between Trump and Clinton, Morrison said that Kaine’s grating performance was enough to push her into Trump’s camp.

“If you had asked me before the debate whether the vice presidential candidate would influence my decision I would have said not a whole lot, but watching the debate definitely had an impact,” she said.

Morrison knew a decent amount about Pence going into the debate since he is currently her state governor--and she’s not a big fan.

“He stands for some very religious things I don’t agree with. The Religious Freedom Act just infuriated me, and he’s known in our state for not being environmentally friendly, our state parks are getting ravaged by logging,” she said.

Morrison is referring to a 2015 state law, the Religious Freedom Restoration Act, which Pence supported that opponents feared would allow Indiana businesses to cite their religious freedom as a legal defense for discriminating against the LGBTQ community. After business and sports leaders protested, the Governor signed an amended law removing those loopholes.

But Kaine's performance disgusted Morrison to the point where she thought it was representative of the Clinton campaign itself.

“I found him to be rude, smug, snipey, self righteous and argumentative. I tried to close my eyes so I wouldn’t see his facial expressions but I just disliked him and I thought, ‘ok maybe he is the perfect running mate for Hillary Clinton because I really don’t like her either.’”

“In a way I felt sorry for Pence, I just continue to feel that Trump doesn’t know how to govern his own mouth and Pence did address that when he said [Trump’s] not a polished politician,” she said.

While she admitted that Trump himself could be “nasty,” she called Pence’s performance “classy.” She said it was in direct contrast to her feelings about Kaine and Clinton. “A lot of Kaine’s stances made me question the good ole’ boy mentality if Hillary would be elected,” she said, admitting she’s not so sure Clinton would break that dynamic considering who she’s running with.

“Clinton tries to come off as middle class, but she’s not. She’s very wealthy, she’d done well for herself. So I’ve never really believed in this message.”

We are interested in talking with other undecided voters, so if you think that describes you, send us an email at decodedc@scripps.com, and tell us why.