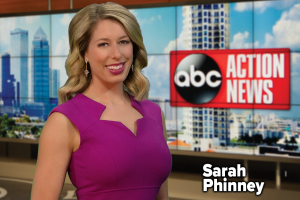 Sarah Phinney is an Emmy Award-winning journalist who joined ABC Action News in June 2018 as the traffic anchor on Good Morning Tampa Bay.

Sarah came to Florida after spending nearly three years in her home market of Cleveland where she filled in as the traffic anchor and on the anchor desk. While at WEWS, Sarah covered a wide range of stories, including the 2016 Republican National Convention and the 2016 Cleveland Cavaliers championship.

Before WEWS, Sarah worked at WDRB in Louisville, Ky. where she earned an Ohio Valley Regional Emmy in the human interest category. Prior to WDRB, she spent time reporting in Evansville, Ind. at WEHT/WTVW.