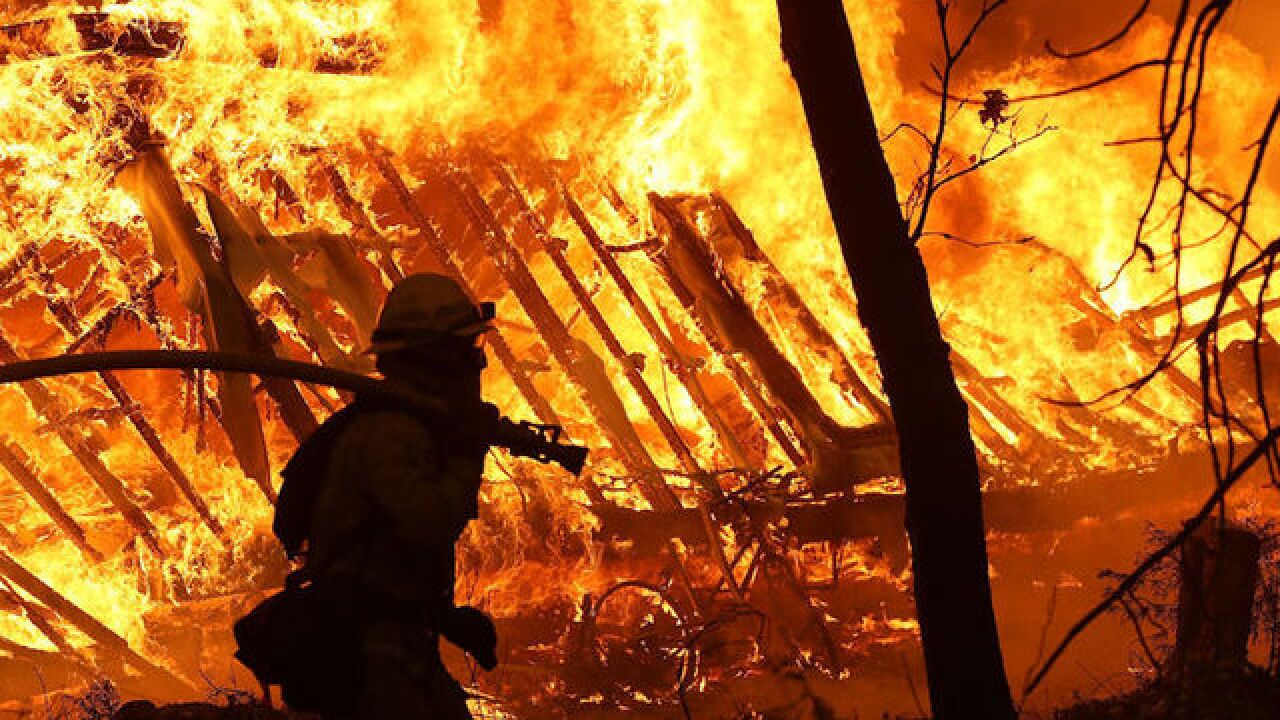 Image copyright 2018 Getty Images. All rights reserved. This material may not be published, broadcast, rewritten, or redistributed.
Justin Sullivan
<p> A Cal Fire firefighter monitors a burning home as the Camp Fire moves through the area on November 9, 2018 in Magalia, California. </p>

The most destructive wildfire in California history is nowhere near done with its catastrophic rampage.

Northern California's Camp Fire has already torched more than 6,400 homes and killed 29 people. If the death toll gets any worse, it will be the deadliest wildfire in California history.

"I'll have nightmares for the rest of my life," said Paradise resident Susan Miller, who drove through flame-lined streets to escape with her daughter.

But the Camp Fire isn't the only inferno ravaging California. Fierce winds are expected to fuel two major wildfires west of Los Angeles, including one that has already killed two people in Malibu.

"In fact, the strongest Santa Ana winds for the south may come on Tuesday, with gusts to near hurricane force," CNN meteorologist Dave Hennen said.

More than 13 million people are in critical danger in the cities of Los Angeles, Long Beach, Santa Ana, Anaheim and Glendale, Hennen said.

Now, firefighters who lost their homes must set aside their grief and work marathon hours to save other residents' lives and houses.

'I'm not giving up hope'

The Camp Fire virtually obliterated the town of Paradise, home to more than 26,000 people.

But Sol Bechtold is still holding out hope for his mother Joanne Caddy, who's been missing from Paradise for days.

"We learned her house was destroyed the other day, so don't know what's happened to her," Bechtold told CNN affiliate KRON. "She's kind of homebound. She doesn't have a car. I need to find my mom -- I'm not giving up hope she's out there."

Colusa Police Sgt. Jarrod Hughes told KTXL that his Paradise home had been destroyed in the blaze. But he still put on his uniform and returned to work once he got his son to safety.

"It's my community, it's where I grew up. It's something I absolutely had to do," Hughes said. "There was no question about it. It was get my family to safety so I can get in and get back up there and help everybody else."

• Camp Fire: The largest of the three major blazes, the Camp Fire, has scorched more than 113,000 acres across Northern California. As of Monday morning, it was about 25% contained, according to the state firefighting agency Cal Fire. The Camp Fire has destroyed 6,453 homes and 260 other structures.

• Woolsey and Hill fires: In Southern California, the Woolsey Fire had spread to 85,500 acres and is about 15% contained. The nearby Hill Fire covered 4,531 acres and was 75% contained. Together, the fires are responsible for the destruction of 179 structures, but another 57,000 are threatened, fire officials said.

• Mass evacuations: More than 300,000 people have been forced from their homes statewide. The majority of those residents are in Los Angeles County, where 170,000 were evacuated.

Celebrities' homes go up in flames

The evacuees included celebrities who lost their houses in the wildfires.

The homes of Miley Cyrus, Neil Young, Robin Thicke and Gerard Butler were among those scorched in the Woolsey blaze. Butler posted a photo on Twitter of the charred remains of a Malibu home and thanked firefighters for their courage.

Thicke posted a statement on Instagram thanking firefighters and volunteers who "risked their lives trying to save our home."

Young, in a post on his official website decrying the impact of climate change, said "I have lost my home before to a California wildfire, now another."

"This is not the new normal, this is the new abnormal," Brown said. "The chickens are coming home to roost. This is real here."

While much of Malibu lies in ruins, the city's mayor pro tem is recovering in a hospital after trying to save his home.

"Jefferson 'Zuma Jay' Wagner is recuperating at a local hospital from conditions related to his efforts to save his home on Friday night during the Woolsey Fire," the city of Malibu said in a statement.

"The City extends its support and best wishes for a complete recovery and quick return to the community that he loves. In order to protect his privacy and that of his family, no further information will be released."

Searching for the missing and dead

But with wildfires still burning out of control, the death toll could rise.

So far, 29 bodies have been recovered in or near Paradise, which was virtually wiped off the map by the Camp Fire. Many bodies recovered from that fire were found inside or near homes or in vehicles, officials said.

In Southern California, officials said two deaths in Malibu were related to the Woolsey Fire, bringing the statewide death toll to 31.

The grueling task of identifying the dead is especially challenging, since some of the bodies are burned beyond recognition.

"In some cases, the only remains we are able to recover are bones or bone fragments," said Honea, the Butte County sheriff. "I know that members of the community who are missing loved ones are anxious, and I know that the news of us recovering bodies has to be disconcerting."