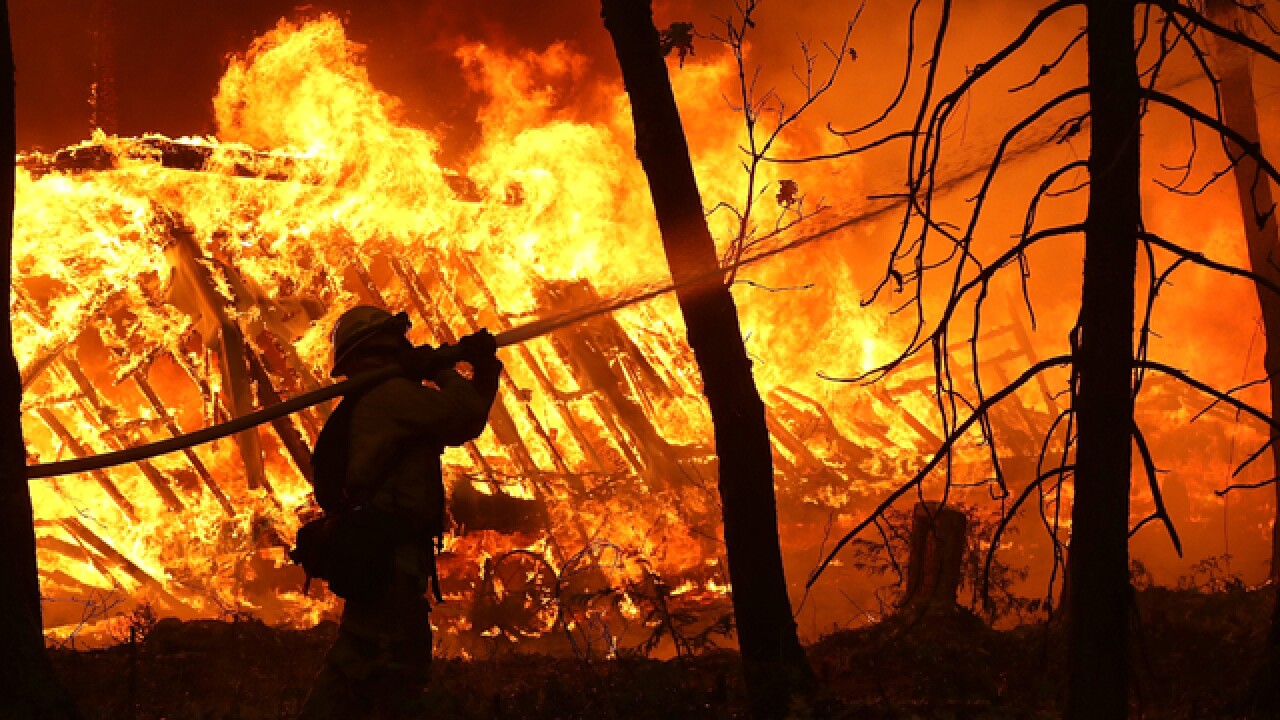 PARADISE, California (AP) — Devastating wildfires on either end of California pushed into new territory Saturday, as fatigued firefighters worked to evacuate residents in harm’s way and contain blazes that already have claimed at least 11 lives, destroyed thousands of homes and other structures and scorched hundreds of square miles.

The three fires began Thursday — the largest in Northern California, where a Sierra Nevada town of 27,000 was destroyed by a fast moving-fire that quickly grew into the state’s most destructive on record. In Southern California, two fires were burning in the drought-stricken canyons and hills north and west of downtown Los Angeles.

The fire that quickly overwhelmed and incinerated the historic Northern California town of Paradise grew to 156 square miles (404 square kilometers) and destroyed more than 6,700 buildings, the California Department of Forestry and Fire Protection said Saturday. More than 50,000 people evacuated the area, and at least nine were killed. One of those who died was found inside a home and the others inside cars and outside vehicles or homes.

Officials said better weather was helping them gain ground. Winds were expected to return Saturday night and drive the blaze south across Lake Oroville, threatening Oroville, a town of 19,000 people.

Officials say more than 3,000 firefighters are battling the blaze, which is California’s most destructive wildfire since record-keeping began.

The blaze began Thursday in the hills near Paradise, about 180 miles (289 kilometers) northeast of San Francisco. Pacific Gas & Electric Company told state regulators that it experienced a problem on an electrical transmission line near the site of the blaze minutes before the fire broke out. The company said it later observed damage to a transmission tower on the line.

The utility said it will cooperate with any investigations, though PG&E spokeswoman Lynsey Paulo said Friday the information was preliminary and stressed that the cause of the fire has not been determined.

Officials said 109 square miles (282 kilometers) has burned north and east of the city, including in Malibu, home to many Hollywood stars.

More than 250,000 people were ordered to evacuate as the Hill and Woolsey fires raged. Officials say at least 150 homes have been destroyed, though that number is expected to surge as firefighters search through cities including Thousand Oaks and Malibu.

Officials were taking advantage of calm conditions to try to contain the blaze before winds pick up again on Sunday.

By late Friday, the small Hill fire’s advance had halted, but the Woolsey fire kept growing, with flames raging from Thousand Oaks south through the northwestern San Fernando Valley of Los Angeles, headed toward the Pacific Ocean.

Just days after a gunman killed 12 people and himself at a country music bar in Thousand Oaks, California, many grieving residents were urged to evacuate as wildfires raging on both sides of the city and shut down part of the main freeway to town.

Some evacuees sheltered at a teen center that just a day earlier was where grieving family members had gathered to receive news on the fate of loved ones who had been in the Borderline Bar and Grill, where 28-year-old former Marine Ian David Long carried out an attack that shook a city that had been considered one of the safest cities in the nation.

Three-quarters of residents in the city of 130,000, about 40 miles (64 kilometers) from Los Angeles, was under evacuation orders — and that likely included people affected by the shooting, Thousand Oaks Mayor Andy Fox said.

“Those lives will never be recovered,” Fox said of the shooting victims. “We’re talking about a serious fire situation, but thankfully we have not lost a single life. And as difficult as it may be, homes can be rebuilt, property can be reacquired.”

Hollywood celebrities — including actor Martin Sheen and singer Lady Gaga — were forced to flee as a devastating Southern California wildfire tore through mansions in the coastal community of Malibu.

Sheen told Los Angeles Fox affiliate KTTV that the fire was the worst he’s ever seen, and he expects that his house was destroyed.

The television station tracked down the “West Wing” actor after son Charlie Sheen tweeted Friday night that he’d been unable to contact his parents. Martin Sheen gave a shoutout to his family to let them know he and his wife, Janet, were safe and planned to sleep in their car at the beach.

Caitlyn Jenner marked herself as safe but said the fate of her home is “up in the air.”

The entire coastal enclave of Malibu was ordered to flee, with Jenner’s former step-daughter Kim Kardashian West and Guillermo del Toro among the other celebrities forced to abandon their homes.

The Woolsey blaze also destroyed the home of “Dr. Strange” director Scott Derrickson and the historic Paramount Ranch where HBO’s “Westworld” and many other shows have been filmed.