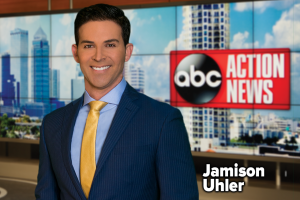 ABC Action News added evening anchor Jamison Uhler to its award-winning news team in May 2010. Jamison co-anchors the 5, 6 and 11pm weeknight newscasts. He joined the ABC Action News team following four years as an anchor and reporter at WCAU-TV, the NBC-owned station in Philadelphia.

Uhler’s journalism career has taken him to Phoenix, Minneapolis, Tulsa, Orlando, and Philadelphia.

He is widely recognized for the quality of his work. Jamison was named Florida “News Anchor of the Year” in 2013 by the Society of Professional Journalists. He is also the winner of six EMMY Awards and has been honored by the Associated Press for “Best Newscast,” and for his investigative and feature reporting. In 2012 & 2014, his 5pm newscast was given one of the industry’s highest honors, an Edward R Murrow award for “Best Newscast.” 2013 also earned Jamison an EMMY nomination for "Best News Anchor" in the Southeast. In his time at ABC Action News, he has also been recognized by the Society of Professional Journalists for his crime reporting on the Kingfish Boat Ramp Murders. Uhler is a graduate of the esteemed Walter Cronkite School of Journalism and Mass Communication at Arizona State University.

Beyond his work on the air, Jamison is active in the station’s year-long “Taking Action Against Domestic Violence” campaign. He was also recently on the Board of Directors for Redefining Refuge, a global non-profit dedicated to helping the victims of human trafficking. Uhler's continuing coverage of Florida's human trafficking issues involving children earned him another EMMY nomination. When Jamison is not covering the news, you can catch him surfing, hiking, biking, and golfing.